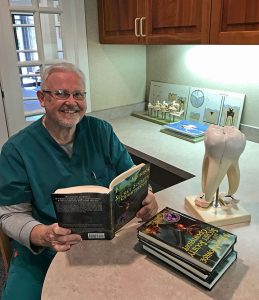 Edward Torba was born early one morning in September of 1951 in Latrobe, Pennsylvania. The oldest of seven children, he grew up in the small village of Kingston…a stone’s throw from the quaint city of Latrobe. His father worked hard as a union cement finisher, while his mother devoted her life to raising Ed and his three brothers and three sisters.

Ed was raised a devout Catholic and attended a strict Polish Catholic school. St. John the Evangelist elementary school was home for the next eight years. After flirting with the idea of becoming a Catholic priest, Ed attended Derry Area High School located in Derry Township.

While attending high school, Ed favored the sciences, and decided in ninth grade he was going to become a dentist. Writing a novel was the last thing on his mind. In fact, it was his senior year English teacher, Mr. Robert Werner, who instilled a small spark to write in Ed’s heart.

Children’s Dentistry was going to be his life’s work, but writing had become his favorite hobby. Ed merged the two when he created a picture book, King Molar. This flip chart book was designed to teach children about their teeth and alleviate their fears of the dentist. Ed’s young patients loved King Molar and Ed was inspired to continue writing.

Using experiences from his childhood and the knowledge he had attained in dental school, he began to write a story about a group of boys who grew up in Kingston, centering his story on young Matt Monroe, the son of a dentist. Through trial and error, networking with publishing professionals and taking writing courses to develop his craft, Ed came to publish the first book in the Matt Monroe Adventure series, Matt Monroe and The Secret Society of Odontology. The second book in the series, Matt Monroe and the Haunted House was published October 15, 2019. Ed hopes to continue Matt’s story for many years to come.

A Note from the Author

My writing career started quite by accident.

In high school and college, my interest lay in the sciences. English, especially creative writing was far down the list. While attending dental school, I developed a character, King Molar, for my youngest patients. I developed a flip chart picture book that was a hit with the kids.

Inspired by my success with King Molar and, later, by the Harry Potter series, I decided to try my hand at writing a fantasy adventure that celebrated wholesome, positive stories.

I always had a vivid imagination. I just never put my thoughts onto paper before writing about Matt Monroe. Many of the incidents in the first book, Matt Monroe and The Secret Society of Odontology, were taken from my childhood. As crazy as it may sound, a glowing, red globe and bigfoot encounters were events we experienced as kids in Kingston. I wanted to go beyond writing exciting stories, though. I wanted to write stories that inspired readers to find the best in themselves and in the world around them.

Popular culture thrives on devastating outcomes and evil is given way too much credit. Villains and monsters are glorified—even celebrated. Vampires have gone from terrifying monsters to sparkly, invincible heart throbs. When and why did we accept this shift?

There is definitely evil in the world, no one can doubt that. However, there is also good, and good always defeats evil. Evil has its day, but good wins the day.

This is what my stories are all about. I hope you enjoy reading about Matt’s adventures as much as I’ve enjoyed writing about them. And always, always, choose good over evil.